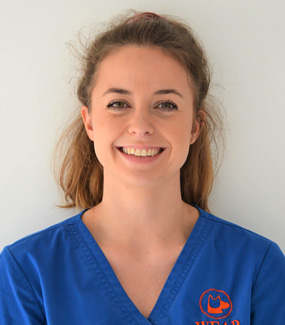 Chloe Wilson started as a placement student in 2017 and has been at Wear Referrals as an orthopaedic RVN since 2019.

She has a particular interest in anaesthesia and analgesia and from October, Chloe will be taking part in an anaesthesia CPD, run by Linnaeus, to continue her professional development.

She loves being a part of the team and appreciates how well everyone gets along with each other across different departments.

Chloe is not originally from the north east, so in her spare time she enjoys exploring the local area and hiking with her dog. She also enjoys the gym, socialising and occasionally helps her friends out with their horses.

At the start of the year, Chloe began fostering an 11-year-old cat called Tosha but he soon become a permanent member of the family, alongside her one-and-a-half-year-old Romanian rescue Ava, who is due hip replacement surgery at Wear Referrals in October.