Harvey was referred to our soft tissue team because he had been suffering from exercise intolerance, lethargy and lameness along with episodes of weakness. These signs were having a big impact on his day-to-day life, especially as he was unable to enjoy his usual walks. As part of a previous work-up a growth had been noticed in the front of Harvey’s chest. 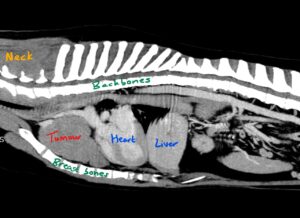 A CT scan was performed, as this gives excellent detail of the inside of the chest. A large lump was present in front of Harvey’s heart, growing around some of the large blood vessels. Non-invasive samples were taken and these diagnosed a thymoma. This is a type of tumour which most commonly occurs in older Labrador and Golden Retrievers. As well as the effects caused by the physical presence of the tumour, it can cause other problems and in Harvey’s case he was suspected to be suffering from a condition called myasthenia gravis. This occurs in up to half of dogs with thymoma and can lead to generalised weakness. 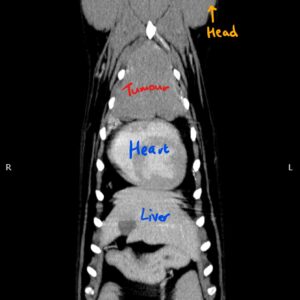 The options for treating thymoma in dogs include surgery to remove the tumour and/or radiation therapy, with surgery being the treatment of choice for the best long-term outcomes. Harvey’s surgery was performed by Mark, one of our soft tissue surgeons. This involved making an entry into his chest through his breast bones and removing the tumour from around the important blood vessels and nerves in the front of his chest. Harvey stayed in hospital for a few days after surgery and has been back to see us several times since. He has been a star patient throughout this treatment and is now six months post-surgery and very much enjoying life again!