A four-month-old puppy was just a whisker away from serious injury after swallowing a set of razor blades.

The daft as a brush Cockapoo, called Maximus, put himself in maximum danger after snaffling the set of blades with his rash behaviour leaving his concerned owners on a knife edge. 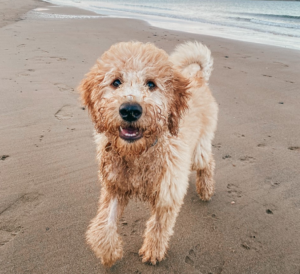 He was rushed to us here at Wear Referrals for expert care, with RCVS and EBVS European Specialist in Small Animal Surgery, Jon Hall, intervening to ensure the dramatic incident became nothing more than a close shave.

Jon resisted the obvious options of performing an operation or endoscopy to attempt to retrieve the blades due to the potential risks involved and decided instead that allowing nature to take its course was, in fact, the way to go.

Jon explained: “We often remove intestinal foreign bodies if they are blocking the gut or risk rupturing the intestine, causing a life-threatening leak of contents and bacteria into the abdominal cavity.

“However, for sharp objects, such as needles and blades, we have to make a careful decision whether the risk of causing injury, as they pass along the intestine by themselves, outweighs the risk of an intervention such as an endoscopy or anaesthetic and surgery. 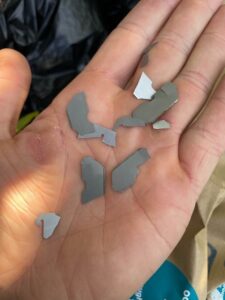 “A few factors, such as the number and location of the objects in the gut, affected our decision, as we know it’s often surprising what can pass by itself.
“An endoscopy was considered to have a risk of oesophageal injury, while gastrotomy (an incision into stomach) would have been most useful when the material was all contained within the stomach. It would also be unlikely that all fragments, beyond the largest, would be retrieved.

“Maximus was given some food and soon afterwards X-rays were taken to see if the foreign materials had started to pass through into the intestines and colon, which they had. 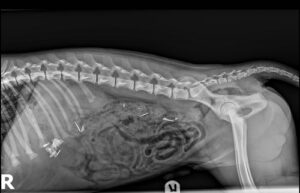 “We decided to wait and carefully monitor the progress of the razor blades to make sure nothing was going wrong, as experience has proved even sharp objects can pass safely through the intestine and be excreted.”
That’s exactly what happened. Maximus was allowed home under the close supervision of his owner and later successfully passed the blades in his faeces with no injury.

Jon added: “We saw Maximus a couple of days later for more repeat x-rays to ensure he had passed all the foreign material.
“They confirmed all the blades had gone and Maximus was able to be discharged with a totally clean bill of health.”
Here at Wear, we specialise in providing expert multidisciplinary care, including oncology, neurology, orthopaedics, soft tissue, internal medicine, cardiology, intensive care and diagnostic imaging.