Wear Referrals came to the rescue of a pug puppy who had swallowed a large sewing needle and thread. 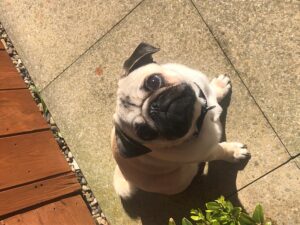 Cute little Doug the pug was referred to us during lockdown after his worried owners had taken him to their local vet, who carried out x-rays that revealed the pet had swallowed a needle which had become lodged in his stomach.

Requiring specialist treatment and fearing the possibility of surgery to remove the dangerous foreign object, Doug’s owners were relieved to hear our state-of-the-art small animal hospital could safely remove the needle and thread without putting him under the knife. 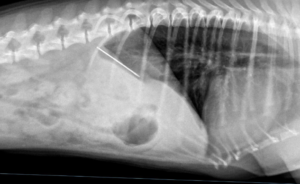 Chiara Giannasi, our internal medicine clinician, led Doug’s treatment and carried out an endoscopy to remove the offending object.

She said: “Little Doug had somehow managed to swallow quite a large needle and attached thread, which obviously caused his owners considerable worry.

“We anaesthetised Doug on arrival and removed the needle and thread from his stomach via endoscopy, which is a flexible tube with a camera on the end and avoids the need for surgery.

“Doug coped exceptionally well with the procedure and went home to his family the same day.”

The hungry pup’s grateful owners said: “Doug has recovered remarkably well and is back to his cheeky little self, with a love of cuddles, sunshine and the outdoors.

“We can’t thank Wear enough. Considering it occurred at the height of the Covid-19 lockdown, the response and treatment for Doug was exemplary.”

As well as being industry-leaders in internal medicine, we also offer a wide range of clinical services including neurology, orthopaedics, soft tissue, cardiology, anaesthesia and analgesia, intensive care and diagnostic imaging.