Our vets were quick to target the solution in an emergency case involving an acutely ill springer spaniel.

Jax, a three-month-old puppy, was rushed to the vets after his owners discovered him vomiting and gagging uncontrollably.

X-rays revealed he’d swallowed a foot-long toy arrow, which stretched from his throat down into his stomach, and he was immediately sent to us.

Owner Leanne Eales, from Spennymoor, said she was stunned to see the images of the arrow lodged inside Jax and feared for her young pet’s life.

Leanne admitted: “I was petrified, I honestly thought we were going to lose him. It was so awful, he was just a puppy and we’d only had him a week.

“There was total disbelief. How on earth could he have swallowed this arrow down whole?

“Then there was the worry of how the vets could remove it and whether there would be some internal damage or worse.

“So you can imagine there was such a great relief when we were told the procedure had been a total success and Jax was fine.”

Chiara said: “Jax was referred to us as an emergency case and his X-rays showed a large arrow-shaped foreign body spanning from the oesophagus down into his stomach and suctioned to his stomach wall.

“He was an extremely depressed dog when we examined him and was grunting and retching.

“An endoscopy showed the suction end of the toy arrow was actually attached to the stomach wall, making it very difficult to grasp.

“This meant we needed a number of our internal medicine team to help with the procedure of removing it using gentle manual traction via endoscopy.

“The team carried out challenging anaesthesia and our medical nurses assisted to ensure the very best care and results for Jax. 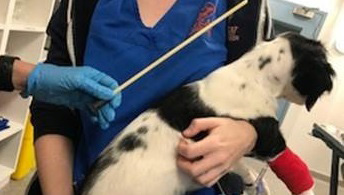 “He was certainly a lot happier and more comfortable when it had been removed. He was able to go home soon after the procedure and has now happily made a full recovery.”

Leanne, her partner Andrew and three children Alexa, 14, Isabel, six, and three-year-old Thomas, were all thrilled at the happy outcome.

Leanne added: “It’s amazing. Jax was back to normal the very next day. He’s still a typical puppy – chewing anything and everything so we keep a close eye on him and if we have to leave him alone, we put him in his crate.

“We can’t thank the team at Wear Referrals enough. They were wonderful and Jax had such brilliant care. They were fantastic.”