A County Durham dog lover has revealed how her pet came within one millimetre of tragedy after being speared by a stick.

The one-year-old Hungarian Visla, called Chester, was seriously injured when running through woodland while out on a walk. 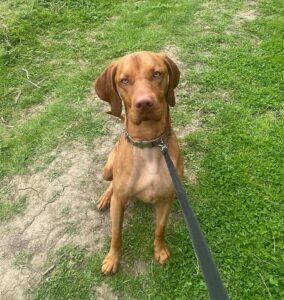 He was rushed to his local vet who stabilised him, before being transferred for specialist care here at Wear Referrals, where he underwent emergency surgery to repair his dramatic wounds.

Owner Bryony Coulthard, from Bishop Auckland, explained: “My partner, David, had taken him for a walk and Chester romped off into the woods.

“David called him but, unusually, Chester didn’t come back and was found cowering in the undergrowth with blood on his tummy, although we couldn’t see anything else.

“It wasn’t until we took Chester to Wear Referrals that we were told he was gravelly-ill and just how catastrophic his accident could have been.

“It was unbelievable. The stick had entered through this skin, ricocheted off his ribs, fracturing some of them, then gone into his lung cavity and punctured one of his lung lobes.

“The lobe had to be removed but the most chilling thing was that the stick had continued through the lung and pierced the sack surrounding his heart.

“They said the stick was just 1mm from spearing his heart. I was just numb at the news and everyone at Wear was saying Chester had been such a lucky dog!” 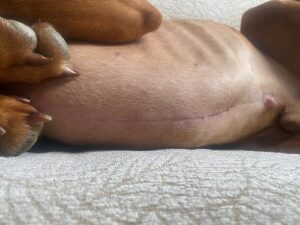 She said: “When Chester arrived, a team effort from our specialist nursing team, anaesthesiologists and surgeons was carried out to immediate further stabilise him, and he had two chest drains placed to combat a build-up of air in his chest cavity.

“He was then sent for a CT scan which identified what looked to be a stick inside the thorax (chest), most likely from the bushes Chester was running through earlier in the day.

“He was taken to surgery to explore his chest cavity which revealed one of his lung lobes (dogs have six) had been punctured and needed to be removed.

“The stick had also managed to make a hole in the sack around the heart (pericardium) and was a fraction away from perforating the heart.

“Chester responded well to surgery, though, and was discharged home four days later to continue his recovery with his family.”

Chester required total rest for the first six weeks after his operation and has since slowly returned to his normal routine.

Bryony added: “We’ve just had the all-clear for Chester to go back to normal and he’s doing really well, bouncing around again and burning off all his energy.

“We’re so grateful to Anna and the amazing team at Wear. They were absolutely wonderful, giving us regular updates and guiding us every step of the way. 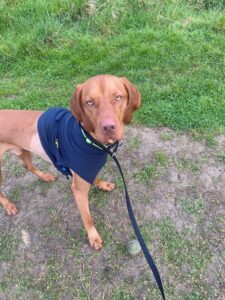 “We’d recommend them one million per cent as they were so lovely to Chester, treating him like one of their own, while giving us constant reassurance and support. We couldn’t be more thankful.”