The internal medicine department at Wear Referrals is our largest team, including seven medics – four of whom are European recognised Specialists; one ECVIM residency-trained clinician; one resident and one medicine intern. These are supported by 11 medicine-specific nurses and the ICU team.

As well as diagnosing and managing many complex conditions, our team manages the long-term care of many particularly special patients, with owners of these patients willing to travel significant distances to benefit from the expertise of our team.

One of these very special patients is Lily, a five-year-old Springer Spaniel. Lily’s owners first took her to see Ben Harris, a European Specialist in Veterinary Internal Medicine and Clinical Director here at Wear Referrals, in 2018, when Lily was just two-and-a-half years old. 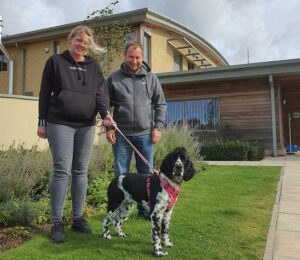 At the time, her owners were very worried about Lily because her sister had died from liver disease the previous year and Lily had started to show similar signs.

Lily’s primary care vet had referred her to Ben due to his special interest in liver disease, being on the board of the international society of comparative hepatology and having written textbook chapters on the subject.

In addition to some detailed blood tests, Lily had a specialist ultrasound scan to assess her liver. Ben advised some keyhole (laparoscopic) liver biopsies, which were carried out by one of the specialist soft tissue surgery team.

Lily was very comfortable after the biopsies and was able to go home the following day while awaiting results.

Ben reviewed the biopsy report, which simply described inflammatory liver disease. Ben’s expertise in liver disease, however, meant that he considered that these changes probably represented a breed-specific liver disease triggered by the immune system.

Accordingly, after some further testing of the same biopsies to rule out other triggers, Ben prescribed medication to suppress Lily’s immune system.

When Lily began to show signs of side-effects from the medication, however, Ben advised changing to a different immunosuppressive drug that is seldom used in liver disease. This decision was based upon Ben’s knowledge from published clinical research and discussions with other liver experts from the hepatology society.

Lily made ongoing improvements and her side-effects resolved completely.

Now, three years on, Lily has completely normal blood results and shows no side-effects from the medication. Lily’s owners live a three-hour drive away from Wear Referrals but still travel to see Ben for Lily’s rechecks.

Unbeknown to her, Lily is now famous, as her clinical case has been presented by Ben at international conferences around the world due to her unusual condition and fantastic response to an alternative way of managing this liver disease.

Ben said: “Lily is an amazing dog who is an important member of her owners’ family. She holds a very special place in my heart and her successful treatment reminds us all of the importance of collaborative thinking, being up-to-date on the latest research and of challenging the dogma of how we treat certain diseases.”