Last December, A “miracle dog” astounded our leading vets with her defiant fight to survive a rare and aggressive form of cancer.

Specialists here at Wear Referrals, last year revealed Molly, an 11-stone Caucasian Shepherd dog, had a rare and aggressive tumour in her skull which was the size of a grown man’s fist.

In fact, CT scans taken showed the tumour was so big it was actually pushing up into Molly’s cranium towards her brain and through her cheekbone, causing her left eye to bulge enormously.

Dr Mark Gosling diagnosed the rare tumour and created a complex 3D print to plan the cutting-edge surgery. The eight-hour operation to remove the cricket ball-sized tumour was carried out by Dr Gosling and RCVS and European specialist in small animal surgery, Professor Jon Hall.

The pair carried out the two intricate operations in which absolute precision was essential to avoid damage to Molly’s brain, eye and jaw. 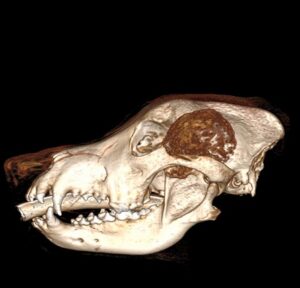 Prof Hall said: “Molly had a huge tumour called a multilobulated osteochondrosarcoma located in her mandible which had grown into her orbit.

“It’s a rare condition but, usually, if this type of skull mass can be completely removed then the long-term prognosis for the animal can be good.

“Part of the challenge for us was to remove all of the mass, whilst making sure Molly would be able to use her jaw normally afterwards and still have a good quality of life.

“The main problem, though, was that the cancer was getting so big it was also pushing through her cheekbone, causing her eye to bulge, and through her cranium, putting pressure on her brain.

“This presented us with a real difficulty, as major vessels and nerves around the huge mass would be hard to identify, creating the risk of life-threatening bleeding, permanent damage to important nerves or fatal injury to her brain.

“However, using the sterilised 3D model meant that every bone cut could be planned with exceptional accuracy and guide the complex surgery on the day.”

The operation proved a total success and Molly was sent to Edinburgh University to begin a course of radiotherapy. 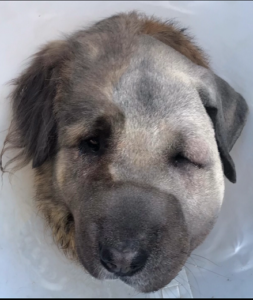 However, the cancer stubbornly resisted the treatment and grew back aggressively, putting four-year-old Molly back in danger despite additional radiotherapy treatment.

Jon said: “It’s very unusual for this type of tumour to be so biologically aggressive, so it was a very surprising and disappointing development.

“Usually, you would not attempt a second surgery in a location such as this, especially following radiation treatment which can damage the tissues.

“However, after discussing the scenario with Molly’s owner, we decided a second operation was the best option in the circumstances as she was suffering pain again and struggling to open her mouth.

“Again, the operation went very well and now Molly is undergoing chemotherapy and is responding well.

“The disease is stable and she is bright, comfortable and doing really well. She’s certainly a remarkable dog and has battled bravely all through this ordeal.”

Molly’s owner Jo Ferguson, from Sunderland, is full of praise for Jon and the hospital team, adding: “We can’t thank Wear Referrals enough for everything they have done for Molly. She really is a miracle dog and it is absolutely unbelievable Molly is still here.

“It’s a very rare, aggressive form of cancer which effects only one or two dogs in a million and I must admit there were a number of times when we feared we were going to lose her.

“She’s a real fighter, though and has amazed everyone with her incredible will to survive.

“Without Jon and the team at Wear, she would no longer be with us and because of them, she is back to her happy and contented self and making a fantastic recovery.