This handsome chap is Reuben, who was referred to the soft tissue service back in June by our internal medicine team. 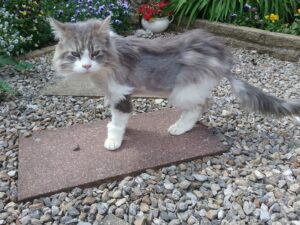 He had been diagnosed with severe pyothorax (‘pus in the chest’) and treated in hospital but, relatively unusually for a cat, the infection had not responded to this management and was affecting the entire left side of his chest. Cats and dogs have multiple divisions, or lobes, of the lung on each side of their chest – usually only one or two of these divisions is affected but in Reuben’s case all of the lobes on the left side were badly damaged. A picture from his CT scan is attached, showing the extent of the problem. Surgery was performed by Mark, one of our soft tissue surgeons, and all of the left side of Reuben’s lungs had to be removed during open chest surgery. Cats and dogs can only tolerate sudden removal of around 50% of the total lung capacity, so this was right on the edge of what is possible and Reuben was very lucky that his right lung was relatively healthy. Due to the severity of the problem it was also necessary to remove other non-vital structures from his chest, such as the membrane around his heart, to reduce the amount infection present.

Reuben remained in our intensive care unit during his recovery from surgery and, being the fighter that he is, quickly started to improve and was discharged from hospital a few days later. His aftercare at home was not straightforward and he initially had to be fed via a feeding tube, but thanks to the dedication of his owner he continued to improve week-by-week and has just been ‘signed off’ from his surgery. As you can see from the pictures, at least his surgical hair clip is keeping him nice and cool!

Pyothorax can have lots of causes, but in cats it most commonly results from external puncture wounds (e.g. a bite) or extension from an underlying pneumonia/infection. In dogs, an inhaled foreign body such as a grass awn is the most common cause. In many cases, as with Reuben, the original cause is unclear. The signs of pyothorax in cats include fast breathing and difficulty breathing and the condition often affects younger cats.