A dog lover has described his desperate race against time to save his one-year-old King Charles Spaniel after the beloved pet swallowed a battery.

The traumatic ordeal began during the recent Storm Arwen power cuts when the young dog, called Hugo, pounced as his Bishop Auckland family were replenishing torch batteries to cope with the seven-day black-out. 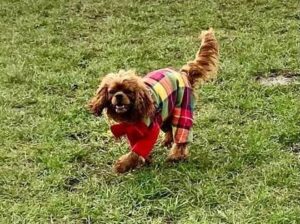 Owner Terry Murphy knew batteries were toxic and potentially life-threatening, so realised the danger and immediately rushed Hugo to the local vets.

He said: “My wife was changing the batteries in one of the torches but when she opened it, one popped out onto the floor.

“Hugo was there in a flash and even in the dark you could tell what had happened. I picked him up and tried to retrieve it but he had already swallowed it down.
“I knew it was dangerous so I put my coat on, picked him up and I was at our local vets 15 minutes later.

“They took X-rays and you could clearly see the battery inside him, and that it was already corroding.
“It was obviously a serious situation and our vets referred us straight to Wear Referrals for emergency treatment. 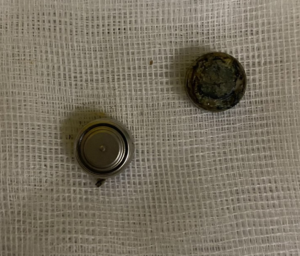 “Wear is only a 15-minute drive away so Hugo was being treated within an hour or so of it happening and that was vital.”
Chiara Giannasi, head of internal medicine at Linnaeus-owned Wear referrals, in Stockton-on-Tees, dealt with the case and confirmed how important it was to intervene as soon as possible.

She said: “Batteries are very dangerous and cause damage almost immediately, especially when they start to dissolve.

“They are incredibly toxic and cause ulceration of the stomach leading to very severe injuries if not removed.

“Unfortunately, Hugo had eaten a large meal prior to swallowing the battery so it was very challenging to remove but we finally managed carry out an endoscopy (flexible camera) with biopsy forceps to locate the battery and remove it from the stomach without the need for surgery.”

Terry says Hugo remained “very groggy” for the following 36 hours but has since made a full recovery, for which he’s very grateful.

He added: “This was a very difficult and traumatic time for us but our local vets and everyone at Wear were superb and acted swiftly and effectively to ensure this was a happy ending not a tragedy.”