Pioneering ankle replacement surgery led by our head of orthopaedics has put a spring back in the step of a young rottweiler.

Eighteen-month-old Oakey was suffering from a severe case of osteochondrosis of the talus, which was making him lame in his right hind leg, when he was referred to us here at Wear Referrals. 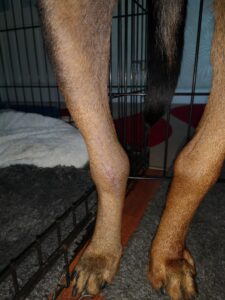 Neil Burton, an RCVS-recognised specialist in small animal surgery and head of orthopaedics here at Wear, was the first surgeon in the UK to perform a BioMedtrix canine ankle replacement when he carried out the breakthrough procedure last year.

Having confirmed Oakey’s condition, Neil said that Oakey was a perfect candidate for the groundbreaking ankle replacement surgery.

He said: “The BioMedtrix canine ankle replacement is a new surgical procedure only available at a select number of hospitals worldwide. We are one of only three hospitals in the UK trialing this joint replacement system as part of a phase two clinical trial to collect more information on outcomes following this procedure.

“In Oakey’s case, the operation involved opening the right ankle joint and using prototype instrumentation to remove the damaged cartilage and some of the bone from the joint.

“The ankle replacement cartridge is then placed into the joint to resurface it. Having a new joint surface makes the joint more comfortable and improves the lameness associated with the osteoarthritis that was present.”

After performing the intricate and pioneering operation, Oakey was hospitalised in the hospital post-operatively for several days, in which time he starred in BBC TV show Night Force, which was filming in the hospital to focus on our out-of-hours emergency vet and nursing team. He was subsequently discharged back to his grateful family.

Devoted owner Gemma Peck, from Chelmsford, in Essex, completed a nine-hour, 500-mile round trip to get her beloved pet the latest specialist treatment with us and was quick to praise Neil and the team here.

Gemma said: “In the first instance, our vets in Essex had referred Oakey to a specialist referral hospital near Cambridge for treatment. They told us Wear Referrals was the best centre in the country to perform this type of ankle replacement surgery.

“Wear is nearly a five-hour drive from Chelmsford, and a 500-mile round trip, but having tragically lost three rottweilers in the last eight years, we were feeling very low and disheartened and only wanted the very best treatment for Oakey. 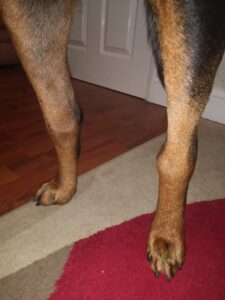 “That’s certainly what we got. Oakey was treated fantastically by everyone at Wear. Neil was fabulous and all the staff were excellent and very kind, so we really appreciate the care they all took to look after Oakey.

A six-month period of careful rehabilitation and recuperation has helped Oakey bounce back successfully, with Gemma adding: “He is two years old now and doing very well now after going through a strict recovery plan.

“He spent the first six weeks after surgery confined to his crate and only going out for the toilet, when he was always kept on a lead. There was also a carefully controlled exercise plan which started off at a low level and built up gradually week by week.”