One of our internal medicine clinicians has expressed her amazement after retrieving an 8cm stick from the nose of a young springer spaniel.

The discovery was made after 18-month-old puppy Meg had been rushed to us here at Wear as an emergency case. 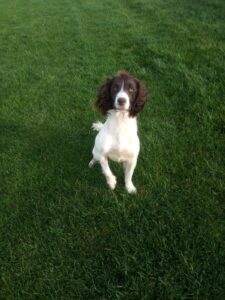 Clinician Chiara Giannasi, who is part of our internal medicine team, was taken aback when she uncovered the stick –measuring the same width as a new iPhone – which had caused loveable little Meg to suffer from a nasty nasal discharge.

Chiara said: “It was an amazing case and I have never removed anything so huge from a dog’s nose before!

“Meg arrived here as an emergency referral as she was suffering a worrying nasal discharge but no-one could understand why.

“We immediately performed a CT scan and endoscopy, which involves the use of a flexible fibre-optic
camera, to try to identify the problem. We were astonished to find an 8cm stick stuck in her nose.”

Identifying the cause of Meg’s nasal problems was relatively straight forward due to the hi-tech equipment and expertise at our disposal here at Wear.

However, Chiara revealed removing the stick was another proposition entirely – something our talented team managed to do without having to resort to surgery.

She said: “It was difficult to extract due to the sheer size and its proximity to the back of the throat but we managed to remove it all without having to resort to invasive surgery.

“Happily, Meg has made a very good recovery and there’s no long-term damage or complications, so everyone is delighted with the outcome.”

None more so than relieved owner David Sherwood, from Fylingdales, near Whitby, in North Yorkshire, who was equally taken aback when Chiara explained the cause of Meg’s discomfort and bleeding. 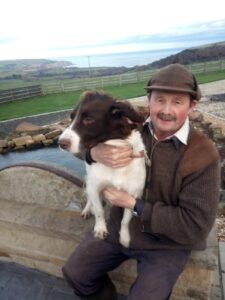 David said: “You’d think something so long would be sticking out the end of her nose, yet you couldn’t see anything!

“I was absolutely amazed and when I showed photos of the offending stick to some of my friends and associates afterwards, they couldn’t believe it either.”

David admitted he did feel a little bit guilty, too, as he’d assumed Meg’s month-long sniffing and sneezing would clear up on its own.

He said: “It must have happened when we were up in Scotland on holiday. I remember Meg was running through a plantation of young trees and suddenly came out sneezing.

“I thought she may have inhaled a piece of grass or a grass seed and never imagined it was something far more dramatic.

“I just thought it would work its way out eventually and that’s what seemed to have happened because, at first, she seemed fine, with just the occasional sneeze.

“However, a month later she started sneezing so badly that blood was coming out of her nose, so I knew it was something serious and immediately took her to the out-of-hours vets.

“They couldn’t actually see anything in her nose either but they were sure something untoward was there because of Meg’s obvious distress and all the blood, so they sent us to Wear Referrals.

“She was admitted on the Monday morning and by this time we were very worried and concerned it might be a serious infection or cancer.

“You can’t imagine our relief when Chiara told us she had sorted the problem by removing an 8cm piece of stick that had become lodged in Meg’s nose. It was amazing.” 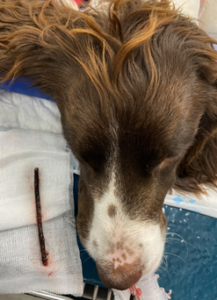